Blog - Latest News
You are here: Home1 / Uncategorized2 / Cardinals the Safest Play Tonight… and here is why

Why are the Cardinals one of the Safest bets of the night ? The St.Louis Cardinals Dominate the Milwaukee Brewers since they won in the 2011 NL Championship Series. At Miller Park they are 29-12 since 2011. This Season alone the Cardinals are 9-3 against the Brewers. Cardinals are also 6-0 in their last 6 after allowing 5 runs or more the night before. The St. Louis Cardinals are playing Great Ball on the Road going 6-1 last 7 games. With Carlos Martinez on the Mound tonight I don’t have a Doubt in my mind that the Cardinals Don’t Win. Martinez has allowed only 2 runs on 7 hits in 15 innings over his last 2 games and has beaten the Brewers twice this season. The Cardinals are 5-1 last 6 Road games when Martinez Starts vs. a team with a Losing Record and 4-1 last 5 Monday Starts with Martinez on the Mound. The way the line is Moving I would Put my money on the St. Louis Cardinals. 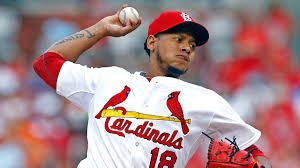