You are here: Home1 / Jim Caldwell

It’s 4 days after the fact that the Colts “Threw” the game against the Jets. I really needed to think about this before I blogged about it. The more I think about it the worse it feel about it. Jim Caldwell cheated everyone, his players that have busted their asses since July, the Fans who paid Big Bucks to witness history, the other teams in the NFL that are chasing the Jets for a playoff spot & most of all the game! 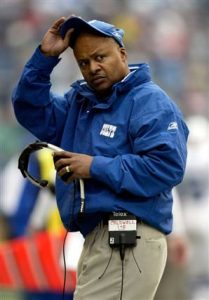 Just watching, Manning, Clark, Addai and Wayne on the sideline was painful for me a huge fan of football! You could see it in the faces of the Colts players they wanted to go 15-0 & take their chances with perfection against Buffalo. It’s so rare that a team go this far without a loss & Caldwell decides to just pull players when so many Colt players expressed that they wanted 16-0! Let’s face the facts here, Caldwell is just a cheap imitation of Tony Dungy. He took over Dungy’s system and inherited a Future Hall of Fame Quarterback. Let’s say Jim Caldwell was the head coach of the Tampa Bay Bucs, would his team be 14-0 with a chance at history? I doubt it. In fact I don’t think Caldwell would do any better of a job then Raheem Morris. My point is although this is Caldwell’s team he should have taken the pulse of the players, owners and fans before deciding to pull all his starters.

Jim Caldwell is very aware that he is not on the good side of the Indianapolis fans. If this were a New York, Chicago, Boston or Los Angeles team going for history and Caldwell pulled that stunt it would be magnified 1000% then it is in small market Indianapolis. Some fans have said they won’t be back. Others have suggested that even if the Colts would win another Super Bowl they won’t forgive Caldwell or team management. In fact some state legislature is trying to get Colt’s fans their money back! I am all for that!

The Jets did benefit from the Colts throwing the game! They now control their own faith to make it into that playoff’s! The Jets now get a National Television game on Sunday night while the Ravens, Broncos, Texans and Steelers should all feel cheated. I personally think teams should be penalized for not playing to win the game! It kills the integrity of the game!

The person I feel the worse for is Colts back up QB Curtis Painter. Caldwell throws the young QB in at home with a perfect season on the line. WHAT KIND OF REACTION DID CALDWELL THINK HE WAS GOING TO GET? He was booed when he walked on the Field and was Booed even worse after he fumbled the football resulting in a Jets Touchdown! All this torture just to get Manning off the field to avoid injury. PS, Caldwell, Manning has never been injured as an NFL or College Player. Even if Manning broke is shoulder playing against the Jets or Bills chasing perfection, the fan reaction would not be as loud as it is now for pulling the plug on the perfect season!

So the Colts played 1 quarter of meaningless football last week and will only play their starters for a limited time in Week 17. They Colts earned a 1st round bye week which means they won’t play meaningful football until 1/16/10 or 1/17/10. Then the Master Caldwell will just flip the switch and get his team to play Intense football come Mid January? I don’t think so! I would love to be a fly on the wall of that locker room, I don’t Caldwell lost the respect of his entire team, but I am sure he has lost the respect if a few players. I love Peyton Manning and how could you not, but I have lost all respect for Jim Caldwell. I hope my home town Jets back into the playoffs as a result of the Caldwell throwing the game. How great would it be to see the Team Caldwell let into the playoff’s knock him out of the playoffs. However you want to envision it I just want the Colts knocked out in the first round! Chasing Perfection did not slow the Patriots down in the playoffs in 2007 but sitting players who are not injured has burnt the Colts before in the Playoffs & I hope it does again this season!