Favre holds so many NFL passing records already. Most career completions, Most career passing yards, Most 3,000 yard passing seasons, Longest pass completion (99 yard Touchdown) & the most lifetime touchdowns! Favre lead the NFL in Touchdowns in 4 Seasons, the only other players to do it 4 times in their careers, Johnny Unitas, Len Dawson and Steve Young! Favre also holds the NFL All time consecutive starts streak! Now the Cal Ripken of Football could also have Hank Aaron numbers. With 1, maybe 2 games left in the season Brett Favre has his entire career riding on this weekend’s games!

If Favre can win the Superbowl this season he would become the only NFL QB to win a Super Bowl after the Age of 40. He would also become the first QB to Win Super Bowls with 2 Different teams! If Favre can accomplish the feat, the 3 time NFL MVP may solidify his place as the Greatest QB in NFL History! All eyes will be on Brett Favre this weekend. So many sports reporters said this guy was finished after struggling down the stretch last season for the Jets. Last week’s performance against Dallas proved to me that Favre is still in the Prime of His Career! Brett Favre has been in 2 of the last 3 NFC Championship games & had the Jet’s sitting at 8-3 last season before the elbow injury. This man can still play and all the fathers out there should spend the time on Sunday explaining to their Kid’s just how Great Brett Favre Really is! 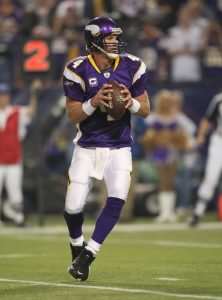